We’re hangin’ out down the street at Tuffy's Music Box!

Pro Wrestling Action returns to Sanford, FL on Sunday, May 22 as we present our grooviest event yet... THAT WRESTLING SHOW!

Featuring qualifying matches to enter the 2nd annual “All-Star Battle” where the winner will become the first ever PRO WRESTLING ACTION ALL-STAR CHAMPION!

Pro Wrestling Action has become the most talked about Central Florida-based entertainment event. Running Sold Out shows since its inception in June of 2021, Pro Wrestling Action attracts a wide variety of local people. The family-friendly all-ages event brings together families, adults who frequent the trendy downtown areas and anyone who loves unique live entertainment.

Featuring such wild Heroic and Villainous characters as Cha Cha Charlie, the Merengue master, Agony the Maker of nightmares, and Marina Tucker the Detroit Barbie. They and many other talents have been seen on Worldwide Television on programs such as WWE Raw, WWE Smackdown, AEW DYnamite, AEW Dark and WOW Superheroes of Wrestling!

This is a unique opportunity to see these talents perform up close and meet them after the show.

Also with this event's 1970's theme, attendees may want to come dressed in their 70's best for the fan Fashion Show/Costume contest before the first match. (70's dress is totally optonal)

Plus so much more!

Tickets on sale now for as low as $10! Click the link below!
https://www.ticketweb.com/event/pro-wrestling-action-presents-tuffys-music-box-tickets/11964315 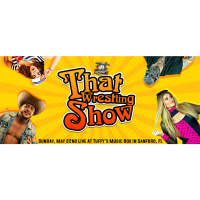