Sanford, Florida: Harry Parkhurst, president of The Cranefeather Society, known for his singing introductions is also an author. He announces the publication of his new novel in Amazon Kindle. This first novel in the Warrior King series is entitled “Return of the Sword”. A political sci fi novel, it is available both in ebook and paperback form and listed as H.F. Parkhurst, author.

A crippled young man finally finds his true love, only to have her kidnapped by a savage race of fanatic barbaric warriors. He pleads for rescue from the government council, only to find their proclaimed philosophy of the people’s welfare, is a lie. He is told rescue efforts are too costly and after all it’s only one girl. Heartbroken, he is driven away by the dreaded, red garbed Elite Guard. Has he lost his true love?

In his heart, the young man knows, a man doesn’t protect his woman because she is weak. He protects her because she is important. Although facing impossible odds, the young man’s love, compels him to enlists the aid of a few loyal friends in a rescue attempt. They embark on an adventure filled with great danger and peril. First, they must face the fierce, flying Fire Dragons who inhabit the Dragon Breath Mountains.

“The tale unfolds on a distant alien world where the populace is being seduced by government officials promoting a false “social welfare” philosophy,” Harry explained. “Little does the populace know they are on the brink of a horrific war with the fanatic warriors. Their government has left them unprepared. Parallels to our own existing government practices fill the novel.”

Harry is the author of other novels. “Tale of Treasures”, an action adventure tale; “Storytales of Starshine”, a YA sci fi fantasy; and another political sci fi novel, “Chronicles of Catherine, A Warrior Princess”. All are available on Amazon Kindle. 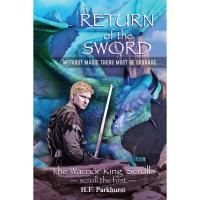 The Freedom Brigade of the American Republic